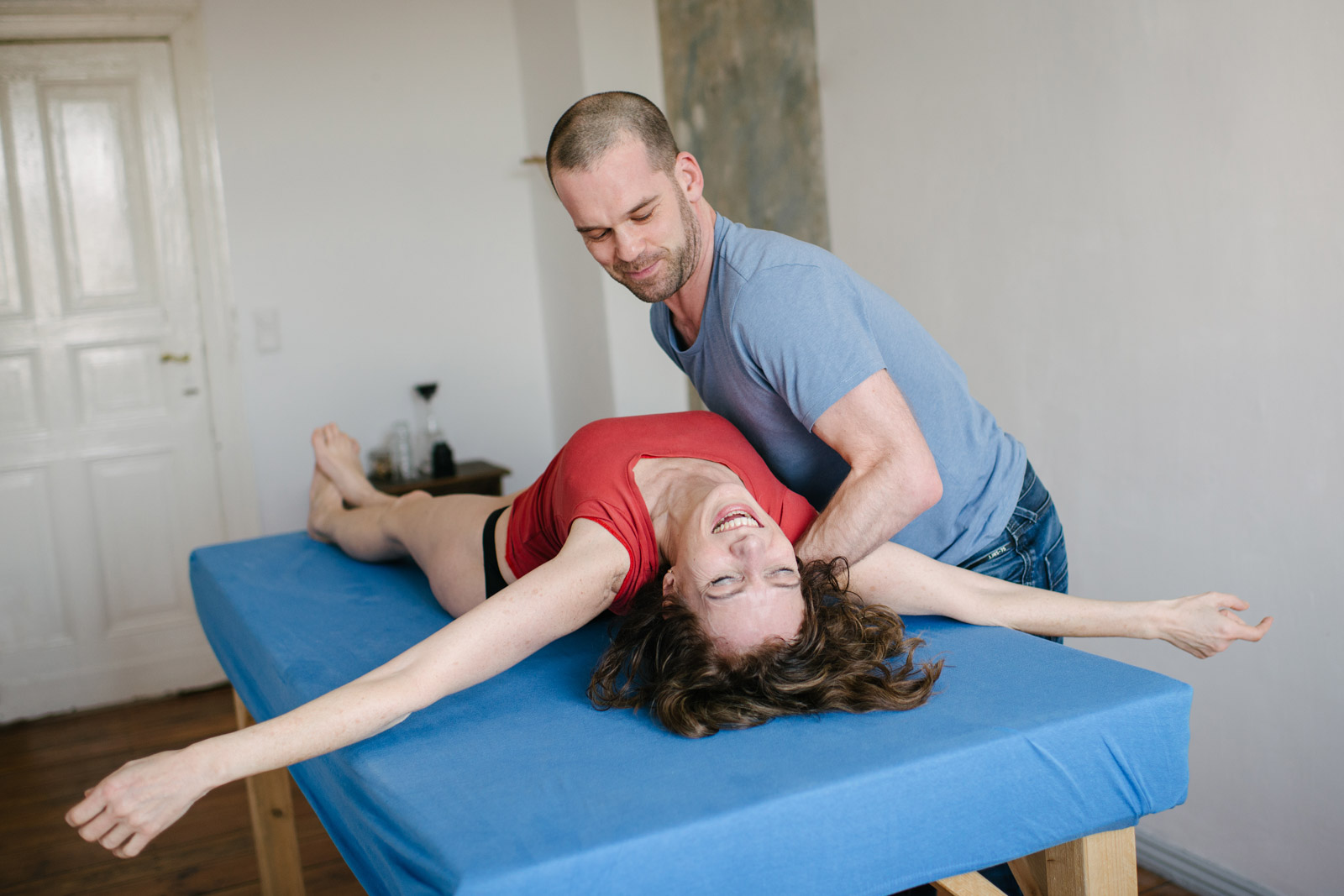 One of the most positively interesting experience I have had. His professionalism, genuine intuition and knowledge have helped me to see and understand my body from a completely new and better level. Therapy with Jochen has helped me to deal with many issues and could strongly recommend him. You will definitely be in the best hands.

Jochen is a highly professional, skilled and intuitive bodyworker.  He creates a very respectful, safe and trusting space to release deep emotion, and to support physical catharsis.  His sensitivity and ability to listen to the body is powerful. I would highly recommend a session with Jochen.  He is a world class practitioner.

It is difficult to describe in words what happens in a Pantarei Session. Because what makes up Jochen's work are not just words, but somatic experience journeys. Pantarei is my most relaxing moment of the week - even though we mostly follow some kind of pain pain. Jochen often finds intuitively body parts that react to pressure with a very special yet interesting pain. This pain for me indicates hidden potential and it is worthwhile to investigate The body sometimes shows extremely unexpected reactions such as numbness, pulsation, heat or noise in the ears - it is extremely exciting to experience this. This usually culminates in deep meditative states. I step away and at the same time I am absolutely present. In everyday life, Pantarei helps me to have more connection to my body and to react more carefully to its signals. Jochen is empathic, mindful and professional. I am very thankful for his extraordinary work and company!

I've been to Jochen's bodywork several times. Starting point for me were different chronic pains as well as psychological impairments such as fears, panic attacks and depression. My psychosomatic complaints, which are also based on damage to the spine always bother me. I liked the approach of Jochen's bodywork, a very holistic approach that looks and feels beyond the symptoms. He tries to understand what is going on underneath them, gently and directed, to help these things to the surface. Jochen has shown himself to be an extremely sensitive and individually responsive therapist who does not force anything, but with his method makes much possible and ultimately reveals ways to self-help. Which is very important to me. The clients themselves determine which priorities are right for them, what they want and hope for through bodywork. Jochen's touches are gentle. During the therapy we have worked a lot with breath, he has supported my breathing with his hands and always asked me how I am doing and what images unfold within me. This has worked very well for me, because the images were very powerful and showed me possibilities to strengthen myself in situations of anxiety and panic. I learned that these are often characterized by stagnation on the physical realm. Jochen also helped me to release my emotions, which I thought was very liberating. I was able to experience psychosomatic connections through bodywork, and under his sensitive guidance I felt protected, understood and completely free of judgment. This intensive experience has unfolded itself in repeated sessions. We could then build on the previous ones and deepen the positive changes through breathing, imagination and targeted touch. I can recommend this type of bodywork to anyone who is open to exploring their own resources of self-help. Especially for those who may already have a longer path of suffering and are looking for a more holistic approaches to healing. Of course, this method is not a miracle, but it opens up wonderful possibilities of meeting with oneself and has the potential to bring you to your own healing sources. Thank you, dear Jochen!

I am an actor. I've been working with Jochen for three years. The starting point for our work were my problems with physical presence and my wish to understand more about some personal fears. Jochen works with great sensitivity and has an individual approach towards these problems. In a very short time, we achieved improvements in acute symptoms such as attention deficit, blockages and postural problems. In the long term, I noticed a change in the way I perceive my body. It has lead to a self-confident, open approach towards my environment. For example, in the course of the work, it turned out that in certain stress situations there was tension in the eye area. This had an effect on my facial muscles, neck, diaphragm, and abdomen. Through the use of different touch and massage techniques, I became aware of this. I can now handle this more freely, perceive the occurrence of tension, and can consciously work with it or let it go. Jochen's work is passive or active (breathing / conscious focusing) in co-operation with the client. Jochen has a great sense of what is possible and how far he can go with the client. I can say that the work with Jochen has brought me much further in many respects.

I go to Jochen because he has the ability to lead me to self-knowledge through honesty and consolation. Because he helps me by carefully choosing his words and touch to facilitate a more differentiated body feeling and he always pickes up on my current emotional situation. I moved to Berlin a year ago. Both the charms of the city as well as the varied pressures at school were so demanding that I lost my inner peace and inner balance completely. I felt helpless, sad, and had problems with sleep. Already after the first meeting with Jochen I realised that a transparent and continuous connection to my body is key to a stable mental condition. Jochen helps me find this key. He gives me clues to use it properly. Today, I am consciously dealing with internal tensions and anxieties. This makes me feel more balanced and self-effective.

Often I had to fight with typical symptoms of a panic disorder: depressive moods, heart palpatations, sweating, anxiety. Therapy with a psychologist made me more self-conscious, but these symptoms never disappeared completely. Jochen knew nothing of my fears, but already in the first session he found a way to "trigger" this fear and show me that fear simply wants to flow and is even a nice feeling! Today, I no longer get these panic attacks anymore. Maybe on a long flight, but now I know how I can "exhale" the fear. I take this openness for my feelings into my everyday life and also transfer it to other painful emotions: jealousy, injuries, sadness and loneliness. I thank you for that!

Great experience that goes beyond just a nice massage and opens possibilities for confrontations that makes you see your body from another perspective and discover more about it. Jochen has a very specific and nice approach. He is very gentle, careful and respectful, but in the same time honest and not afraid of problematic territories.

I have received 3 session of Jochen’s bodywork. It was very deep and profound experience for me. I have faced my trauma in my body and with his magic hands he has helped me to deal with it. To relax so well that I don’t have that much tension in my body anymore. I fully recommend his work. He has a beautiful welcoming presence and went  deeply into all the tension in my body. He is very precise and accurate in his work, even if he works on the level of pain. He can listen to the body and knows when and how to touch the places which need attention..thank you Jochen..it was a great journey..